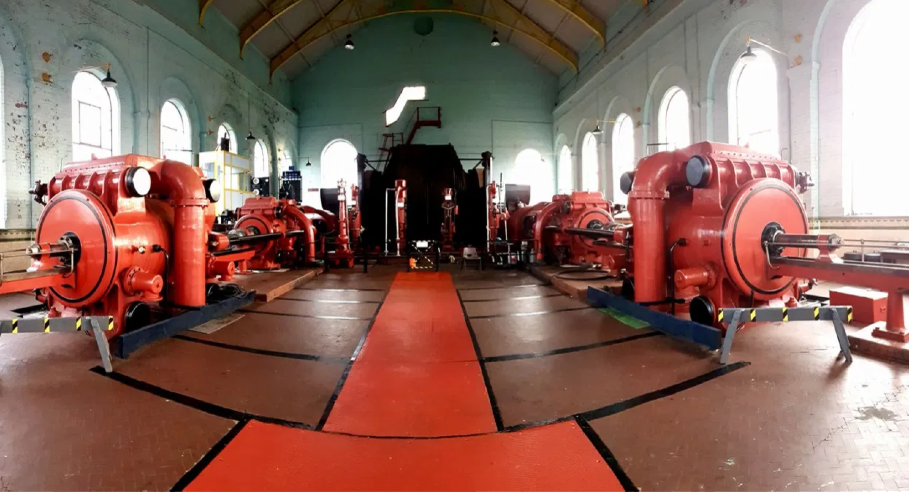 Towering over the Astley skyline is an eye-catching reminder of Lancashire’s once great coal mining past. This is the headgear at Astley Green Colliery, the last surviving one in the whole of the Lancashire coalfield. This, with the winding house and winding engine, is the backdrop for a host of activity at the colliery, now known as Lancashire Mining Museum. The museum is run by the Red Rose Steam Society, which is a charity run entirely by dedicated unpaid volunteers.

The colliery closed in 1970 and was due to be completely demolished but it was still home to the unique winding engine, manufactured in 1910 by Yates and Thom in Blackburn. This 3300 hp capacity twin tandem engine lifted approximately 8 tons from the coal workings, nearly 3000 feet below ground, up to the surface in less than two minutes.

Believed to be the largest and most powerful winding engine still in existence in Europe the intervention of Greater Manchester Council and the Lord-Lieutenant of Lancashire ensured that it would be saved for future generations.  The National Coal Board agreed to save the winding house, winding engine and 98-foot lattice headgear, which was produced at Stockton-on-Tees by Head Wrightson.

Unsure what to do with the site after these unique parts of it had been saved, the site stood empty and neglected for approximately 14 years and during that time was heavily vandalised. The engine house windows were broken and the weather, pigeons and scrap men all got in, leaving the engine rusted and in a state of complete neglect that would ensure it would need a massive amount of work and effort to get it operating again.

In the early 1980s, the Red Rose Steam Society came on site to try to restore the engine to working condition.

What do they do and why?

The vision of Lancashire Mining Museum is “to be a thriving heritage destination which connects visitors and the local community to the unique industrial history of the Lancashire coalfield, providing a place for people of all ages, backgrounds and abilities to experience and learn from the past, keeping the stories of coal mining and associated industries alive in a friendly, stimulating and inspirational environment.”

The team spent the best part of 30 years working on the restoration project and the engine finally ran in 2012, for the first time since 1970; over 40 years since it last turned. The engine, engine house and headgear are all Grade II listed with Historic England and the headgear is also dedicated as a scheduled monument.

As the original lease issued to the Red Rose Steam society was coming to an end, approximately three years ago it was decided to rename and rebrand the site as the Lancashire Mining Museum, being all that is left above ground for visitors to experience what it was like working in the mining industry. This lead to a drive for new volunteers to help take the site forward as a community destination and asset and to ‘stop it becoming just an old man’s shed’. The society has now been offered a new 25-year lease, which will allow them to put in a large bid to the National Lottery Heritage Fund to try to restore the headgear, which is now on the heritage at risk register.

“Some of the volunteers would comment if asked that the Mining Museum has resulted in the keeping not only their sense of humour but also their sanity. Many of the volunteers are senior citizens, some of whom have lost their partner, and the volunteer group ethos is of great comfort to them and undoubtedly reduces social isolation and loneliness.”

“When you are discussing finances it is not just a matter of what is in the bank and what your direct debits are for instance. There is a judgement to be made as to what you should have in reserves to see you through those tricky times when your income could vary considerably. Covid-19 and its impact has varied enormously over the last twelve months and wasn’t even on the horizon when we started to discuss some kind of blended finance offer with GMCVO. GMCVO understood that we could only estimate what our income was going to be and allowed us a six month lead into our repayment schedule where we would repay interest only which proved to be both commercially sensible and removed a lot of pressure from the trustees who are all unpaid volunteers. The big question was what we needed to have in reserves that would take us into a period when we could have the public safely back on site attending various money raising functions without wearing out our worry beads. Of course when people see the monster of a winding engine turning they have no inkling of what goes on behind the scenes to make that happen. It is a matter of some pride to us that we may have got this judgment right.”

What funding did they receive and how did it help them?

The 110-year-old working winding engine is a massive draw for visitors and to see this turning is awe-inspiring. They needed to be able to run the engine on demand for these demonstrations but the generator in particular had become far too temperamental, with visitors there to see the engine turn and it unexpectedly failing to fire up. The trustees and volunteers therefore decided that the generator, compressors and air receivers on site would all have to be upgraded to ensure they could run the engine when they required.

Burton’s Biscuits on the Wirral offered the museum two large air-cooled compressors and air receiver tanks, which meant they could have enough air to run the engine for prolonged periods. But the generator was still a problem after having spent almost £4000 pounds trying to repair it, and with the industrial electricity supply on the site removed they didn’t have capacity to run such large compressors with mains electric.

The Society then approached GMCVO for an investment of £25,000 to purchase a generator. The investment included a £5k grant, and part of this was used to install a new CCTV system to help prevent any vandalism at the site. Such a large overall expense would have depleted the Society’s reserve funds considerably, putting other major projects to develop the whole site for the community on hold. Once installed this new generator meant Lancashire Mining Museum could advertise running of the engine on a regular basis with the knowledge that the new generator will perform and start. 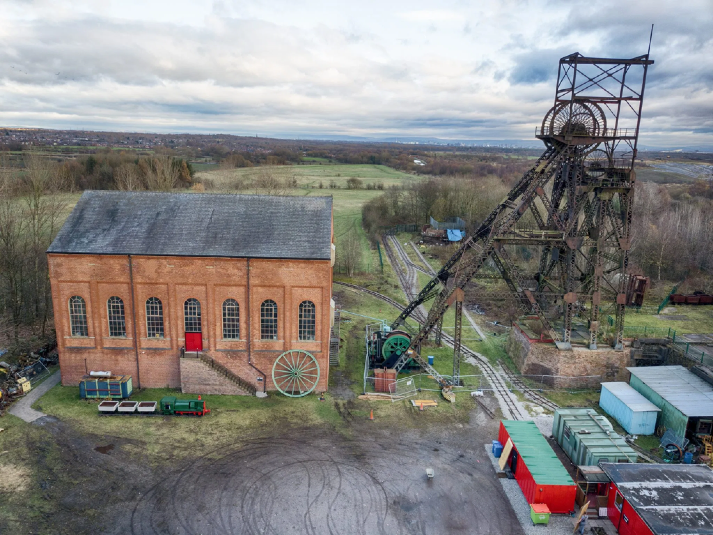 What impact has the funding had?

With the new generator, the museum were able to comfortably offer visitors an experience day on site - to come along to drive the engine under the supervision of the team. This has had a tremendous uptake and so far and in the four months before the Covid-19 lockdown they had raised almost £1000 for the society this way. They are confident that this will be something that people will take up more and more once the museum is able to open fully again. The investment from GMCVO has enabled the museum to ensure that this magnificent 110-year-old winding engine will be able to carry on running for the foreseeable future, for the enjoyment of all their visitors and once again become a major WOW factor in a visit to the museum.

This has also given the crew of engineering volunteers a boost, because they are now able to display this key attraction in all its glory after dedicating a lot of time to its restoration and maintenance. This gives these volunteers a real sense of pride in what they are doing. The commitment of the museum volunteers and the position it has in their lives is a key area of social impact, with many of the volunteers having depended on their work with the museum to help them tackle loneliness, isolation and mental health issues. On the 15-acre site there are many areas which require a range of skills to maintain and improve. This means that there are volunteer roles for people of all ages and backgrounds and the museum has attracted over 70 volunteers from differing backgrounds. In giving their time, the volunteers receive a lot of satisfaction in a job well done as well as a sense of purpose and belonging.